Forgive us as we have had to get a new internet server as well as problems with understanding how to increase our file capacity. Thanks to our genius nephew, Vallard. We owe a debt of gratitude for his help and patience. 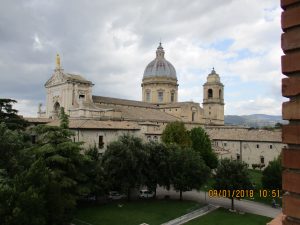 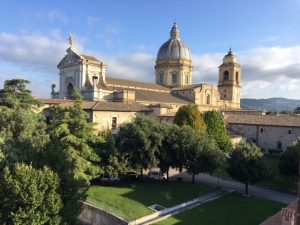 These are the beautiful views outside of our window where we stayed in the Domus Pacis,  We had the opportunity to share this hotel with some of the local Franciscan priests. This is the view from our window of Santa Maria degli Angeli. It is the 7th largest christian church. St Peter’s Basilica being the largest. It sets at the foot of the Assisi Hill in Umbria. This is supposed to be the place where St. Francis died. Inside of this church is a smaller church much older with the dimensions of 5.5 by 3.2 m called the Porziuncola (meaning little portion of land) is the most sacred place for all the people and religious orders that adhere to the teachings and spiritual disciples of Saint Francis of Assisi. 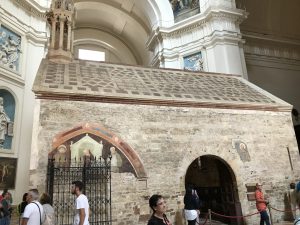 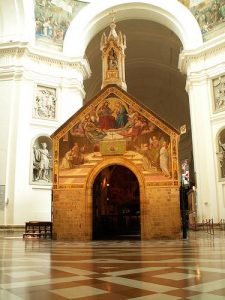 This is were the Franciscan movement started. Catholics from all over the world make pilgrimages here every year. While we were staying near by there were people from Munich Germany area as well as people from Benin Africa and Scotland.Saint Francis after a pilgrimage to Rome, where he begged at the church doors for the poor, St. Francis said he had a mystical vision of Jesus Christ on the wayside chapel of San Damiano, 2 miles from Assisi. In which the Christ crucified came alive and said to him three times, “Francis, Francis, Francis, go and repair my house which, as you can see is falling into ruins. Saint Francis took this literally to mean the ruined church. He sold his horse some of the cloth from his fathers store, to assist the Priest for this purpose of rebuilding the church. Saint Francis’s father found out about selling cloth from his store to give to the church and was highly irritated, sought restitution. Saint Francis in the presence of the bishop, renounced his father and family. Restoring several churches one of which was the little church, Porziuncola. Saint Francis built a small hut outside of the Chapel of Our Lady of the Angels and was soon joined by others, he founded the Franciscans.
Inside the Basilica of Santa Maria degli Angeli are murals depicting Saint Frances’s life. 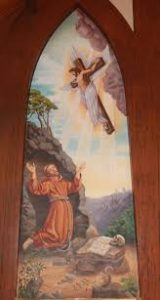 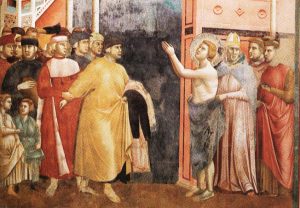 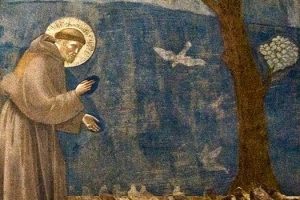 He was made Patron saint over nature and animals as he loved nature and sang and prayed for the animals.
We also went to the Church of St. Francis, and listened to the Bells as we approached. The streets were typical of “old italy” with the cobble stone roads that were very narrow and up and down the hill side. We thoroughly enjoyed seeing the history, architecture and culture of the entire place. The Statue was to represent St. Francis coming back from a battle his lost. 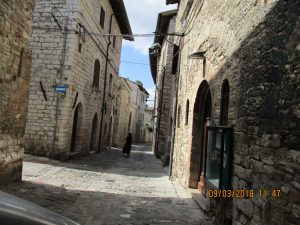 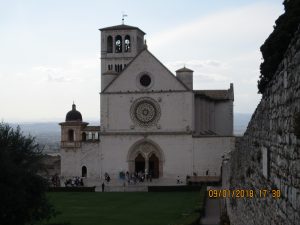 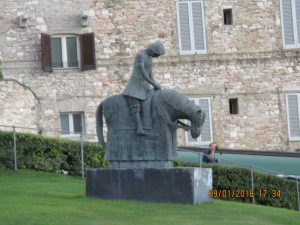 As we were scouting around we saw this cool looking castle on the top of one of the mountains, it is called “Rocca Magiore” which means the “Major Rock” and just had to go have a look. Of course, I had to climb up the turret where the stairs were 3 feet wide and all carved out of rock. I went up 4 stories to get to the top and was able to snap a few pictures. It is an old museum now and History tells of it as a setting where all the rich people stayed there and closed out all the poor. After an uprising the new king said the walls would never be built again and two hundred and fifty years ago, a new pope came by, claimed the property for the church, and rebuilt it as a papal retreat. After years of disrepair the church gave it to the City of Assisi and they gladly took it and converted it into a museum. 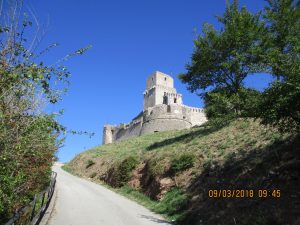 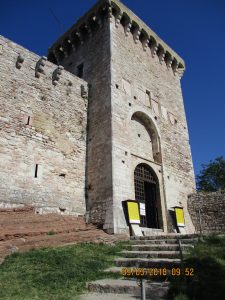 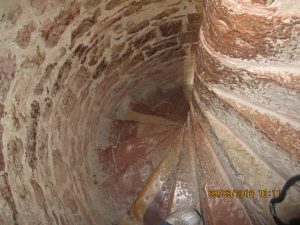 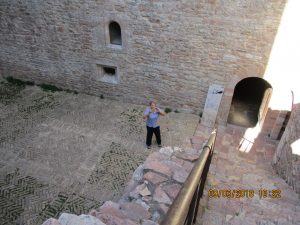 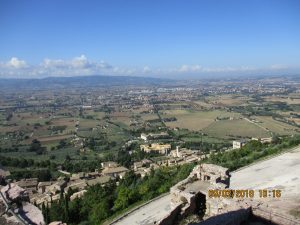 reminiscing a bit I saw a sight that reminded me of my mission 40 years ago, the little  69 cinque cento or 500 fiat. I had to get a picture. I wanted to ask if I could just sit in it, but the owner never came by and we got tired of waiting for them. I love these little cars. 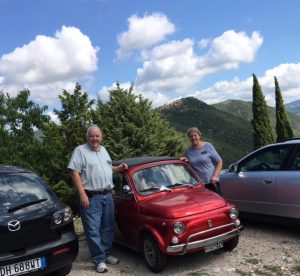